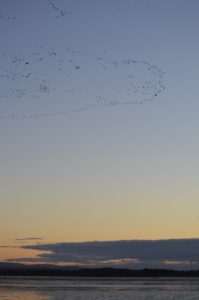 A record number of more than 50,000 pink-footed geese arrived on Findhorn Bay over the weekend of 1-2 October 2016. The pink-footed goose breeds in Eastern Greenland, Iceland and Svalbard. The migrating geese arrived from Iceland and Eastern Greenland to overwinter in Great Britain – a distance of between 1,000 – 2,000 km. The other migratory population of pink-footed geese migrates from The Svalbard Islands in the Arctic Ocean, through Norway to the Netherlands, Belgium and Western Denmark.

Bird-watching enthusiasts and other members of the public have been making the most of the opportunity to see the geese as they come and go from Findhorn Bay around sunrise and sunset. The noise of the geese is quite intense around the Bay, and there are so many of them that their wing-flapping can be heard as they come in to land en masse.

Below are some photos of the pink-footed geese arriving back on the Bay, taken at sunset on Saturday 1st October. They arrived in large scale V-formations or “skeins”, but then broke ranks to drop onto the Bay in a manoeuvre known as “whiffling”. During whiffling the geese fly sideways or upside down in order to descend rapidly in a controlled way. It is an impressive and chaotic sight as the geese come in to land!

This wonderful display of nature occurs every morning and evening at the moment and will last only a few weeks or less before most of the geese head South, but it is a stunning display that people in Moray are lucky to witness.

Access to the Nature Reserve is easiest from the bird hide on the Kinloss-Findhorn road or the little foot bridge opposite Manse Road in Kinloss. Parking is free and easy at the Kinloss Church car park as well – then just follow the happy chatter coming from the bay (wellies are a good idea, but not essential).

Once on the shore, there are many tree trunks to sit on. Wear warm clothes, bring a camera and binoculars and enjoy the show! Anyone wishing to join groups of Friends of Findhorn Bay members going goose-watching should use the contact form to find out who is going when.

The Kinloss Flower Club’s project later in the year of a wheelchair accessible path in the South Eastern area of the Bay will make things even easier for the general public, with a pavilion at the end for comfortable viewing, resting and observation in the nature reserve.