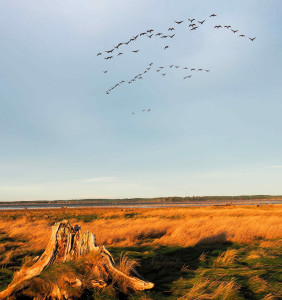 On the 13th December 2016 two representatives of Friends of Findhorn Bay took the concerns of hundreds of locals from Findhorn, Kinloss and Forres to a meeting designed to reach a negotiated agreement over the problem of unregulated shooting in Findhorn Bay Nature Reserve.

Friends of Findhorn Bay have made it clear that they would like to see a ban on all shooting in the Nature Reserve, and the group has a strong mandate for this – last December over 800 local people signed a petition asking Moray Council to ban the shooting on the Nature Reserve altogether.

But in a spirit of compromise, Lisa Mead and Gelda MacGregor, from Findhorn village and Forres respectively, came to the meeting willing to see a realistic shared vision of the bay that would:-

1. Reduce the number of days that shooting is allowed in the bay;

2. Significantly reduce the numbers of shooters through a permit system;

3. Limit the areas where shooting is permitted, so that people are able to enjoy parts of the bay without worrying whether it is safe to walk there.

4. Obtain a commitment that shooting will not take place within 400m of residential homes.

Such a compromise is intended to allow the practice of shooting to continue in a considerate and controlled way, and it would finally create a fairer balance between the rights of the shooters and the majority of local people.

As Lisa Mead pointed out “The number of shooters is very small compared to the local population as a whole, but the presence of people with shotguns on the Bay actively inhibits and discourages the many other peaceful pastimes and pursuits that people could be enjoying there. It also prevents the development of autumn and winter wildlife tourism in the area. This imbalance cannot continue.

In particular, the current situation makes large areas of the bay near Kinloss a no-go area for local families and children, a situation that surely can’t be considered desirable by any of the groups involved.”

The meeting, which was attended by representatives from 4 shooting groups (2 local clubs, plus national reps from BASC and SACS) was ably chaired by Roy Dennis of the Findhorn Bay Nature Reserve, who now has the task of suggesting a fair compromise agreement.

Lisa Mead added “Friends of Findhorn Bay as a group, and as local people who care deeply about the bay, are fully behind Mr Dennis’ efforts. Unfortunately, it was clear from last night’s meeting that any meaningful change to the status quo will be very hard for the shooting groups to agree amongst themselves, let alone with us.

We remain hopeful however that they will see that there is an overwhelming desire from local people for a better balance between the shooters’ freedom to practice their sport, and the rights of local people to enjoy the peace and beauty of the bay.”

After the meeting Gelda MacGregor said, “The key to this has to be local democracy. Stephen Cooper (Moray Council’s Head of Direct Services), Alisdair Mceachan (Moray Council’s Head of Legal), Cllr Anne Skene and Cllr Lorna Creswell all came to last night’s meeting, and whilst we would like to thank them for attending, we would ask them and the wider Council to bring a lot more pressure to bear on the shooting groups in this process. It is after all their responsibility to represent the interests of the large numbers of their constituents who want a significant reduction in the shooting as a minimum. Without a more active role in pushing for change, and without a commitment of Moray Council to introduce a bye-law to regulate or even ban shooting, the shooting lobby won’t make a meaningful compromise, and then these negotiations seem unlikely to succeed”.