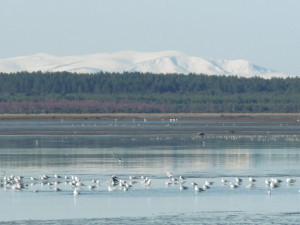 If you have read any of our previous blogs, you will know that Friends of Findhorn Bay is advocating for a ban on shooting in the Findhorn Bay Local Nature Reserve. There has been some speculation locally as to who signed the formal written petition that was submitted to Moray Council by Friends of Findhorn Bay on 21st December 2015. The petition calls on Moray Council to end the shooting of geese and ducks in the Nature Reserve for a number of stated reasons.

As a result of this speculation, we decided to look a little more closely at the 800+ signatures on the shooting ban petition signature lists, to see where local support for a ban is coming from in the Moray Council Ward 8 (Forres) area. We restricted signature collection to Ward 8 specifically, because it covers the area most affected by the shooting. The results of our analysis are set out below.

The 2011 Census records 748 residents of Kinloss village and 776 residents of Findhorn aged 16 and over. This is a total of 1524 adult residents in Findhorn and Kinloss – the villages located closest to Findhorn Bay and hence the people most disturbed by the shooting. Note that due to the formalities of the Moray Council petition process we were only able to collect signatures of residents who are actually registered to vote in this area.

Here is the breakdown of petition signature locations and numbers who signed:

So in terms of the percentage of voting residents living closest to Findhorn Bay who are in favour of a total ban on shooting in the Nature Reserve, this is approximately 34% of the population of Kinloss and 28% of the population of Findhorn. Around 12 people collected signatures, either going door to door or passing the petition around at various local events. We did not manage to go to every household by any means, but of the houses we did visit, we found that around 90% of the people we asked were in favour of a ban on shooting in the Findhorn Bay LNR.

I personally asked about 25 individuals in Findhorn village and only 2 people did not want to sign the petition – in other words 92% signed. Another Friends of Findhorn Bay member and long-term local resident of 30+ years, who collected many signatures in Kinloss, reported “I must have spoken to over 150 people about the petition. I could count on two hands the number of people who have said “no” to signing, and on one hand the number who have spoken up for the shooters. Many people feel very passionate about this issue“. So his “signature collection success rate” was 90%.

This is a significant number of local people in favour of a ban, by any elected official’s reckoning. My sense from these numbers is that if Moray Council tries to ignore or make light of this issue, the voice in favour of a ban is only going to get stronger and more active. 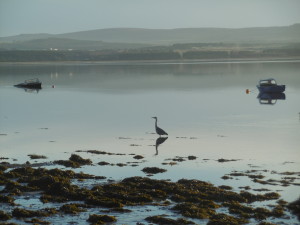 And it is important to note – this movement calling for a ban covers a wide cross section of the public, from all walks of life and of all ages. This is not a “fringe” movement. It is a large group of people who would like to see Moray Council honouring the purpose for which the Findhorn Bay Local Nature Reserve was originally set up – to be a place “where people can come to experience, enjoy, learn about and get involved with nature… a Local Nature Reserve should be a signal to the public that this is somewhere to experience nature” (extract from SNH Report No 174 on Local Nature Reserves).  At the moment, this is not possible for almost half the year, due to the presence of people shooting geese and ducks. See this short video of the shooting to get a sense of what is happening on a regular basis in the South Eastern corner of Findhorn Bay during the 6 month shooting season.

The presence of men with shotguns, and their often antisocial and disrespectful behaviour so close to residential areas acts as a strong deterrent for anyone else who might wish to enjoy the natural beauty of Findhorn Bay. What Friends of Findhorn Bay would dearly love to see throughout the year is Findhorn Bay as a place where people can experience the wonders of nature, in a peaceful, enjoyable and “leave no trace” way.

With 5 weeks to go before Moray Council considers the petition to ban shooting on Findhorn Bay, it is really important that we continue to press the point that shooting is a totally unacceptable activity in a designated Nature Reserve, especially near to the well-populated residential area of Kinloss. 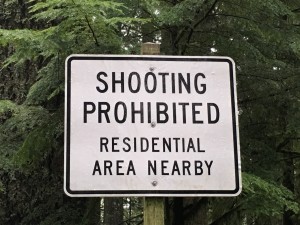 Over 800 people living in the IV36 area of Moray signed the shooting ban petition late last year and it will be considered by the Economic Development & Infrastructure Services Committee at Moray Council on 8th March.

The main arguments in favour of a ban are available to view in the Petition Submission.

Meanwhile, our latest Friends of Findhorn Bay Newsletter provides contact details of the relevant Moray Councillors and local MSP, Richard Lochhead, so that you can contact them easily and quickly.

We need your help to ensure that the voice for peace on Findhorn Bay is heard loud and clear!

It is hard to believe that only five weeks ago Friends of Findhorn Bay had not even been dreamed of, and now here we are with our own website, a Findhorn Bay Wildlife Watch Facebook page with 133 members, an inaugural meeting happening in a few days time at the Kinloss Church Community Hall, and over 500 signatures collected on a formal petition to Moray Council, calling for a ban on the killing, injuring and maiming of geese and ducks in the Findhorn Bay Local Nature Reserve. Phew!

As I pause for breath to reflect on what has been quite a hectic month, I recall what drew me to attend that first meeting of concerned residents of Kinloss, Findhorn and Forres on a very chilly 5th November 2015. The invitation came from a friend to attend a meeting of a small group of local people, who were becoming increasingly concerned about the escalation of shooting in the Findhorn Bay Local Nature Reserve and also in the number of dead and injured geese being found around the Bay.

I remembered back to when it dawned on me that shooting was happening on Findhorn Bay. I was shocked that this kind of activity would be allowed in an area designated as a nature reserve, since shooting seems so fundamentally incompatible with the words “nature” and “reserve”. So I started researching the legal position relating to the shooting and I attended a meeting with a few local people who were concerned about the issue in late 2013. One of the group had recently moved to Kinloss and was really disturbed by the intermittent, persistent, almost daily gunfire and the men in camouflage walking around the area carrying shotguns. Well, who wouldn’t be?

There was significant concern amongst us, and so we started to gather information about the situation, such as who owns the land around the Bay, how far the Local Nature Reserve extends, its other legal designations (it is also a Ramsar site, a Site of Special Scientific Interest and an EU Special Protection Area and Special Conservation Area), why there had been no movement in relation to the establishment of shooting byelaws for the Bay, even though the Findhorn Bay LNR Committee voted in favour of shooting byelaws back in 2005. 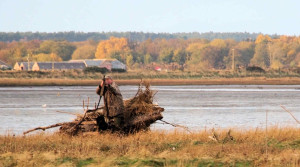 In December 2014, some local people went to the quarterly Findhorn Bay LNR Committee meeting (which is open to the public) to express their concerns at the increase in shooting. This resulted in a rather heated exchange with the Chair of the Findhorn Bay LNR Committee, who happens to be a keen wildfowler himself and who is – let’s put it this way – not exactly impartial or unbiased on the subject of “wildfowlers’ rights”.

Meanwhile the shooting situation on the Bay continued to get worse, with the season since September 2015 being the worst to date in terms of numbers of shooters and dead and injured geese being found around the Bay. Enter stage right the Rev. Louis Bezuidenhout, who became the Church of Scotland minister for Kinloss and Findhorn in January 2015. Louis and his wife Elsie love the Bay and its birdlife and Louis is a keen photographer and nature video maker. He became increasingly shocked by the situation and by the number of people shooting in the nature reserve. Ministers talk to a lot of people of course, but Louis says that he felt rather alone with the shooting issue for quite some time, as did I. Was no one else concerned about the shooting in the nature reserve we both wondered, at opposite ends of the Bay…

In mid-October 2015 Mary Vines started an online petition on the Care2 website, calling for an end to the shooting of the geese on Findhorn Bay. My ears pricked up – this online petition had already gathered several hundred virtual signatures by the time I signed it, and to date 870 people have ‘signed’ it. This petition could not however be officially presented to Moray Council, because their rules on petitions require them to be in writing, and signed only be people living in Moray and on the Electoral Register.

The informal meeting in Kinloss on 5th November gave five residents from Kinloss, Findhorn and Forres the chance to share with each other how we felt about the shooting. By the end of the meeting we had agreed to launch a formal, written petition, with me as the lead petitioner, or “lead goose” as I briefly became known! We had to decide early on whether to call for regulation of the shooting or a total ban. In the end we decided to call for a total ban, because in our hearts that is what all of us would prefer, for the sake of all life within and surrounding the Bay. Our V-formation was very quickly established, and things have been flowing very gracefully between us so far (maybe I am tempting fate by saying that?!) 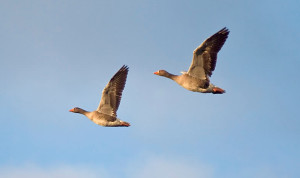 Since the first meeting three more local people have joined the fledgling Steering Group that we decided to form in order to move things along, so now we are eight. The most heartening thing is that over the last month each of us has stepped forward on different occasions to take the lead with different tasks. The decision to establish a more formal group was taken at our third meeting on 23rd November and the name Friends of Findhorn Bay was unamimously agreed. The decision to hold a public meeting was taken then too, and here we are, 2 days from our inaugural meeting, which will take place just 39 days after our first meeting.

The result of our collective endeavours has been quite astonishing – so much has already been accomplished in so short a time. We realise that the road we are travelling may be long, but when you think of the thousands of miles that a goose migrates each year, one flap at a time… Somehow this puts things a little more into perspective.